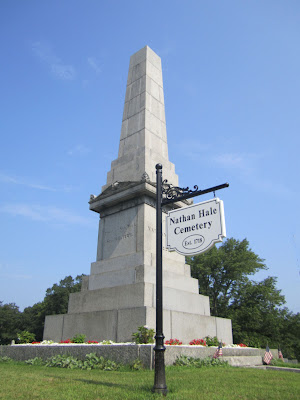 So, this is the Nathan Hale monument in Nathan Hale Cemetery in Coventry, birthplace of Nathan Hale. Someone who didn't spend way too much time reading about Connecticut history might suppose that Nathan Hale is buried here, but he's not - he's buried somewhere in New York, presumably near where he was executed by the British on today's Upper East Side. I recently wrote about the Nathan Hale Schoolhouse in East Haddam, and of course living in New London, the State Hero is sort of ever-present. So I've thought more than one really should about Nathan Hale. I even sort of had a dream about Nathan Hale, which is just wrong, though it wasn't about him, really, it was kind of about his girlfriend (or fiancee, whatever she was) Alice, and it was set in the modern day, and they were college students, and it was entirely nonsensical, as dreams usually are. Anyway. This is what I thought about Nathan Hale and his hometown while in Coventry:

- If I grew up here, and was then let loose in New Haven at 15, I'd go totally crazy too. And my crazy would be crazier than what Nathan's father was most worried about him doing: playing cards. This is really the middle of nowhere.

- In fact, it feels far more remote than East Haddam, which Nathan thought was a howling wilderness of boredom.

- It's easy to roll your eyes at Nathan Hale. The whole perfectly-perfect-at-everything-he-touched (except spying) thing can get old. It hits you especially in Coventry, where practically everything is named for him. The street, the state forest, the cemetery, the homestead in which he never lived. But then you remember that he remained relatively obscure for some time after his death. It wasn't until decades later that he became such a big deal. Which means that he was almost a lost, forgotten, ignored failed spy. That makes him far more likable.

- The whole State Hero concept can get...misleading. I don't mind the multiple statues of and memorials to Nathan Hale. (Or whoever.) But sometimes they make it seem like it all - bravery, sacrifice, patriotism, great hair - ended with him, back then. And they didn't. Behind that monument up there was an American flag, flying at half-staff in honor of some other young man from Connecticut who'd been just as brave and selfless in another long and difficult war. It's safe to say he will not get a bunch of statues. Which is fine, I guess, because it's just not how we do things anymore. But I should have made sure to get that flag in that picture.

Posted by Johnna Kaplan at 2:16 PM