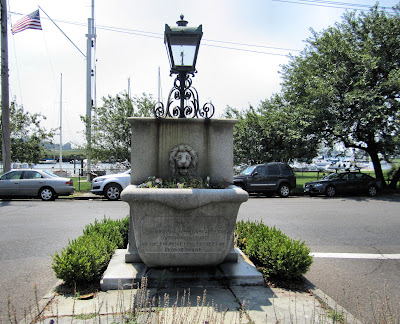 For years, I wondered about a monument in the middle of the Post Road in Southport. Not the one in that picture, but a lumpen hunk of rock with a plaque on it, located across from a Dunkin' Donuts in a patch of grass where no one would ever go unless they a) really wanted to see the monument or b) were being paid to mow the grass. Every time I drove past it I thought to myself, "What is that? And why would they put it there?"

Then, the other day, I was attempting to clean out my Explorer favorites bar. I tend to favorite things in groups, in manic periods of enthusiasm, and then forget them. One site I found was a book by Jared Sparks (born in Willington!) which talks about the Pequot War. Specifically, the section I found myself re-reading was about John Mason and the Mystic Massacre. I knew the general summary version of this event (400 to 700 Pequots, including women and children, trapped in their fortified town and burned alive by English troops from Connecticut and Massachusetts.)

But I had never really paid attention to what happened next. And it turns out that about six weeks later, Mason and his troops went West, pursuing the surviving Pequots who'd fled towards their Dutch allies in New York. On this little trip, the Englishmen got a look at the sites that would become New Haven and Fairfield. And at a swamp in the latter place, they finally confronted the remaining Pequots, killing about 100 men and selling the non-combatants into slavery. This, the last battle of the Pequot War, is known as the Great Swamp Fight or Fairfield Swamp Fight.

That is what the lump of stone by the Dunkin' Donuts commemorates. The plaque notes simply, "Here ended the Pequot War." It gives the date of the Swamp Fight: July 13, 1637. That was almost exactly 374 years ago today! And there was something else. There was another Southport monument commemorating the battle. And this one was a little...different.

So I went to Southport, not the stretch of Post Road that might as well still be Fairfield, where the rock lump is, but the downtown, coastal part, where I'd been only once or twice before.

This part of Southport is really on a whole other level. What people who have never been to Connecticut think of as the stereotype of Connecticut, that's Southport. It's one of the very few places here - Groton Long Point is another - that make me stare and point like a bumpkin. And there, between the water and a fancy real estate office and a triangular, flower-adorned apartment or condo building that looked as if it had been imported from Paris, was the monument. It stood in the middle of Main Street, luxury cars cruising by on three sides. CT Monuments.net calls it "an example of the middle-of-the-roadway sculpture dreaded by monument bloggers, who generally prefer to take pictures while standing on the safety of a town green." (I'm so happy someone else feels this way. I wrote about this here and I'm just glad I'm not the only one.)

The monument, dedicated by the DAR in 1903, was once a fountain. Today, there are flowers planted in the basin where water once flowed from the open mouths of tiny lion-heads. There's a lamp on the top. It's all very tasteful. And at the bottom are engraved the words "This fountain commemorates the valor and victory of the colonist forefathers at Pequot swamp."

The founding settlers of Fairfield, or some of them, were men who had fought in that swamp. I admit, when I had returned my jaw to its proper position after gaping at some of the magnificent houses and water views near the memorial, I did mutter to myself, "Damn, I'd kill a bunch of people to be able to live here too!" Of course the Pequot War was about 10,000 times more complex than that, or than anything I've written about it here. And of course I wouldn't live in Southport if they paid me. The whole exclusive enclave thing makes me feel vaguely ill. But the place is undeniably gorgeous.

There's a statue of John Mason in Windsor. I realized I'd seen it, and even taken a terrible picture of it once, while driving past the Green two years ago. I didn't know then who it was, and merely noted that it depicted a man drawing a sword, wearing a "silly puritan hat." The statue used to be in Groton near the site of the Massacre, but that became, you know, awkward, so it was moved. It also got a new plaque, less laudatory than the original, which extolled Mason's heroism. People occasionally paint its hands red. It's hard to imagine there being any such vandalism - or guilt - in Southport.
Posted by Johnna Kaplan at 6:42 PM