In the Middle Of the Night... 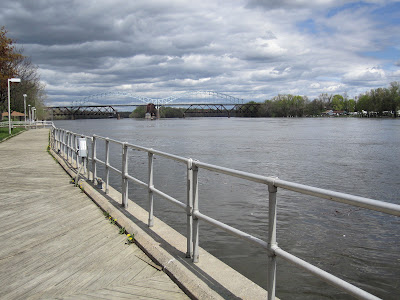 I was in Middletown yesterday, and I've been researching the city for a story that will be published sometime this summer. I've been fond of the Arrigoni Bridge since the first time I saw it. But I had no idea that in the video for River of Dreams, Billy Joel and his back-up singers are standing on Middletown's other very cool-looking bridge, the Providence & Worcester railroad swing bridge over the Connecticut. The whole video was filmed here, apparently, in Portland and Essex and other nearby towns. I don't think I'd ever even seen that video before, despite the fact that I really liked that song when it came out 18 years ago. Good God, I'm old.
Posted by Johnna Kaplan at 4:38 PM