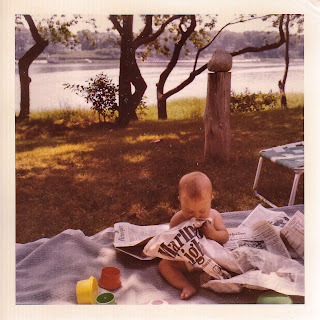 That would be me, in 1977, eating the New York Times. I found the pic while looking for a one to go with this column I wrote about New London in the '80s. That picture, like most things from the '80s, is not cute.

Also, I covered a talk about the Jewish chicken farmers! OK, they were other sorts of farmers too. But when I and my equally easily amused friend first encountered this chapter of Connecticut Jewish history a few years ago, we kept referring to them as "the Jewish chicken farmers." There's just something amusing about chickens, if you're easily amused. Anyway, the talk was full of interesting tidbits. For example, the mall - oh, sorry, The Shoppes at Buckland Hills in Manchester is built on land that was once Jewish-owned tobacco farms. I don't know whether having that information will make shopping there seem better, or worse, or just...ironic somehow. Also, now I really want to go to Colchester. And I'm not sure that's a sentiment voiced often...
Posted by Johnna Kaplan at 5:33 PM