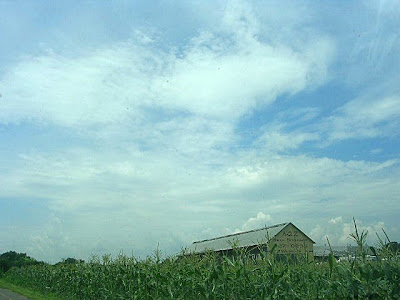 I was reading Boston Magazine's special summer New England Travel issue, with particular interest in their Connecticut section, of course. One thing that made me stop and go "?!?" was their claim that CT's "top crop" is tobacco. I spent a good portion of last summer driving around Hartford County (I had a reason, sort of), where I knew tobacco had been grown, and where the landscape is still pleasantly dotted with tobacco sheds. But I thought they were history, one of those quirky unexpected things about the state's past, like, "Hey did you know that Jews weren't allowed to worship publicly until 1843? No? CT: We're full of surprises!"

In Hartford County I took pictures of things like the structure above, in Windsor, with the self-storage ad on it. I thought, "Hmm, that must have been where they grew the tobacco back in the day." And then I read that it's supposedly the "top crop." So I searched, for as long as you can reasonably be expected to search agriculture statistics when you're not being paid for it, and the best stats I could come up with put tobacco at 4th or 5th. So maybe not "top crop", but still a functioning industry - and according to some of what I read, an industry that's still doing quite well. What really amused me was the discovery that Connecticut makes shade tobacco, which is used for the outside wrappers of cigars. CT: Leading the nation in pretty exteriors for 200 years. Now, there's a slogan.

So I don't know if that's really a tobacco field in my picture. It doesn't look like tobacco to me. But what do I know? I'm from New York City, where tobacco comes in already smokeable form, in a box. Admittedly, I haven't lived in NY for years. I should probably learn to distinguish crops already. I lived in the Midwest for almost two of those post-New York years, during which time I think my "I'm from New York" ignorance card probably expired. While there I learned to identify soybeans, because they were everywhere, and corn, because...it has corn on it. I was once stuck in traffic in a cornfield. I hadn't known that was possible, but it is. The Midwest is also full of surprises. But not tobacco, I don't think. So I don't know what that is above, or what it's for, or where exactly tobacco ranks in the state's agricultural production. But it's a pretty picture. And Connecticut is good at pretty.
Posted by Johnna Kaplan at 12:00 PM